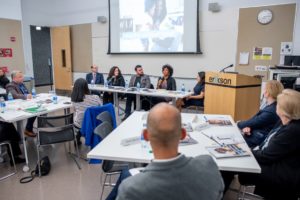 The Tour started with an opening dinner at the Erikson Institute. We learned from Geoff Nagle, President and CEO of Erikson, about their comprehensive Risk and Reach report, which provides county-level data for each county in Illinois on 15 early childhood risk indicators and 17 publicly-funded early childhood programs and services. We were joined by two important Early Learning champions in Illinois – Lieutenant Governor Juliana Stratton and State Senator Omar Aquino – who spoke about how they will use the Risk and Reach report to drive effective policy and ensure that funding goes to those children who are most in need. We were inspired by their work to establish Early Learning as a social justice and equity issue for the children in Illinois.

The next day we heard about Illinois’ Early Learning funding and governance structures from a powerhouse panel that included Jesse Ruiz, Deputy Governor of Illinois; Grace Hou, Secretary of Illinois Department of Human Services; and Diana Rauner, President of the Ounce of Prevention Fund. Illinois is the only state that has a dedicated funding stream for infant and toddler programs, known as the Prevention Initiative. It was clear that strong relationships and deep collaboration within the Early Learning community have been critical to building a high-quality Early Learning system in Illinois. 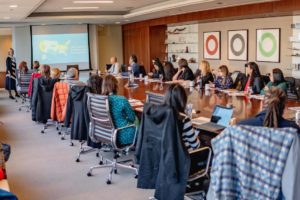 We were able to learn from two Early Learning workforce panel discussions. The first, which focused on home-based child care providers, was hosted by the Pritzker Family Foundation. We heard from Janet Froetscher, President of the Pritzker Family Foundation, about how philanthropy is coming together to fund research on best practices to support this important segment of the Early Learning workforce, which cares for the majority of young children in the US. Illinois Action for Children shared about innovative models they have implemented to strengthen connections between home-based and center-based programs, and SEIU discussed how unionization of family child care and Family Friend and Neighbor providers in Illinois has resulted in increased compensation and benefits, as well as improved training opportunities.

The second workforce panel provided the opportunity to hear about the state’s collaboration with higher education to build career pathways that meet the needs of its workforce, as well as its ongoing efforts to increase compensation for the field. We also learned about Illinois’ competency-based professional development and credentialing system for the Early Learning workforce, which is integrated into an online platform called Gateways to Opportunity. 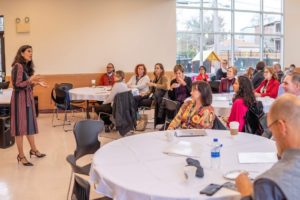 The last two panels of the Tour centered on the cross-systems work Illinois is doing around health and Early Learning initiatives. Cynthia Tate, Executive Director of the Governor’s Office of Early Childhood Development, shared about how the state is integrating evidence-based mental health supports into its Early Learning programs and, at the final panel, a group of public health experts, researchers, and practitioners discussed how Illinois is leveraging both state and federal funds to expand its home visiting programs and combat maternal mortality disparities. In Illinois, every woman who receives home visiting services has the option to also receive free doula services from a trained professional. We learned from a doula about how this program–which provides prenatal, birthing, and postpartum support–has not only led to strong positive outcomes for children and their mothers, but has also empowered communities. In closing, Phyllis Glink, Executive Director of the Irving Harris Foundation, emphasized that the success of all of this work has been grounded in innovation and pilots that have allowed Illinois to build models that are deeply based in the needs of local communities.

Walking the Talk: Kidango Provides a Living Wage to its Early Learning Workforce